The problem: pre-ignition and knocking

In a normal spark-ignition engine, the air-fuel mixture is heated due
to being compressed and is then triggered to burn rapidly by the spark
plug. During the combustion process, if the unburnt portion of the fuel
in the combustion chamber is heated (or compressed) too much, pockets of
unburnt fuel may self-ignite (detonate) before the main flame front
reaches them. Shockwaves produced by detonation can cause much higher
pressures than engine components are designed for, and can cause a
"knocking" or "pinging" sound. Knocking can cause major engine damage if
severe.

Isooctane as a reference standard 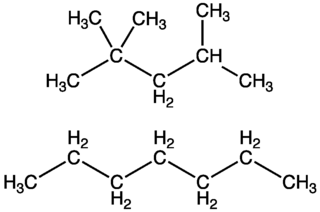 Octanes
are a family of hydrocarbon that are typical components of gasoline.
They are colorless liquids that boil around 125 °C (260 °F). One member
of the octane family, isooctane, is used as a reference standard to
benchmark the tendency of gasoline or LPG fuels to resist self-ignition.

The octane rating of gasoline is measured in a test engine and is defined by comparison with the mixture of 2,2,4-trimethylpentane (iso-octane) and heptane
that would have the same anti-knocking capacity as the fuel under test:
the percentage, by volume, of 2,2,4-trimethylpentane in that mixture is
the octane number of the fuel. For example, gasoline with the same
knocking characteristics as a mixture of 90% iso-octane and 10% heptane
would have an octane rating of 90.[2]
A rating of 90 does not mean that the gasoline contains just iso-octane
and heptane in these proportions but that it has the same detonation
resistance properties (generally, gasoline sold for common use never
consists solely of iso-octane and heptane; it is a mixture of many
hydrocarbons and often other additives). Because some fuels are more
knock-resistant than pure iso-octane, the definition has been extended
to allow for octane numbers greater than 100.

Octane ratings are not indicators of the energy content of fuels. (See Effects below and Heat of combustion).
They are only a measure of the fuel's tendency to burn in a controlled
manner, rather than exploding in an uncontrolled manner. Where the
octane number is raised by blending in ethanol, energy content per
volume is reduced. Ethanol BTUs can be compared with gasoline BTUs in
heat of combustion tables.

It is possible for a fuel to have a Research Octane Number (RON) more
than 100, because iso-octane is not the most knock-resistant substance
available. Racing fuels, avgas, LPG and alcohol fuels such as methanol may have octane ratings of 110 or significantly higher. Typical "octane booster" gasoline additives include MTBE, ETBE, isooctane and toluene. Lead in the form of tetraethyllead
was once a common additive, but its use for fuels for road vehicles has
been progressively phased-out worldwide, beginning in the 1970s.[3]