planet Jane
2016-06-28 03:10:22 in Liveblogs
First, some backstory.
You're probably pretty familiar with the basic conceit of the Transformers franchise, the Autobots wage their battle to destroy the evil forces of The Decepticons, and all that, and while that describes quite a few Transformers properties, it's not really true in the IDW-published comics anymore for a number of reasons. Really, most of the well-known Transformers actually don't factor into this story in any way, and there are no major human characters at all (which fans of the cartoon, and some of the earlier IDW comics, will probably cite as a blessing).
Optimus is only a character here in the beginning, I'll let the blurb here fill you in on the plot so far, I assure you that this actually is a pretty good jumping in point for the IDW Transformers continuity (these are for the record, very loosely based on the original Generation 1 cartoon, but in my opinion they're far better). Optimus Prime--whose dialogue I really must encourage you to read in the immortal Peter Cullen's voice--does not quite appear here as you might know him. IDW Optimus is not exactly a cheery dude. He's rather sullen (Sullen Cullen?), and more resigned to his duty, and his position as the leader of the Autobots, than enthusiastic about it in any capacity.
They throw a lot at you here, but I'll not make the mistake of overexplaining things, after all:

There's a lot that goes on in the next few panels:
Optimus finds himself on a reborn Cybertron (it was blasted into a nuclear ruin earlier in the IDW continuity), quite confused. Thankfully, Rodimus (the former Hot Rod, if you've seen the original Transformers Movie) fills him--and us--in. If you were big on the G1 cartoons you might very vaguely remember the name Metalhawk. He was a Japan-exclusive G1 character whose toys never officially made it stateside, so he's pretty obscure, that will be a recurring theme in this comic.
Hawk and Optimus have some disagreements about the history of things: Again, a lot of history is tossed around here, some of it was touched upon in earlier runs, but much of it wasn't, you're not expected to get all this on first blush.
The Decepticon remnants present on-planet have, meanwhile, been herded into this enclosure area, and are being kept as POWs. 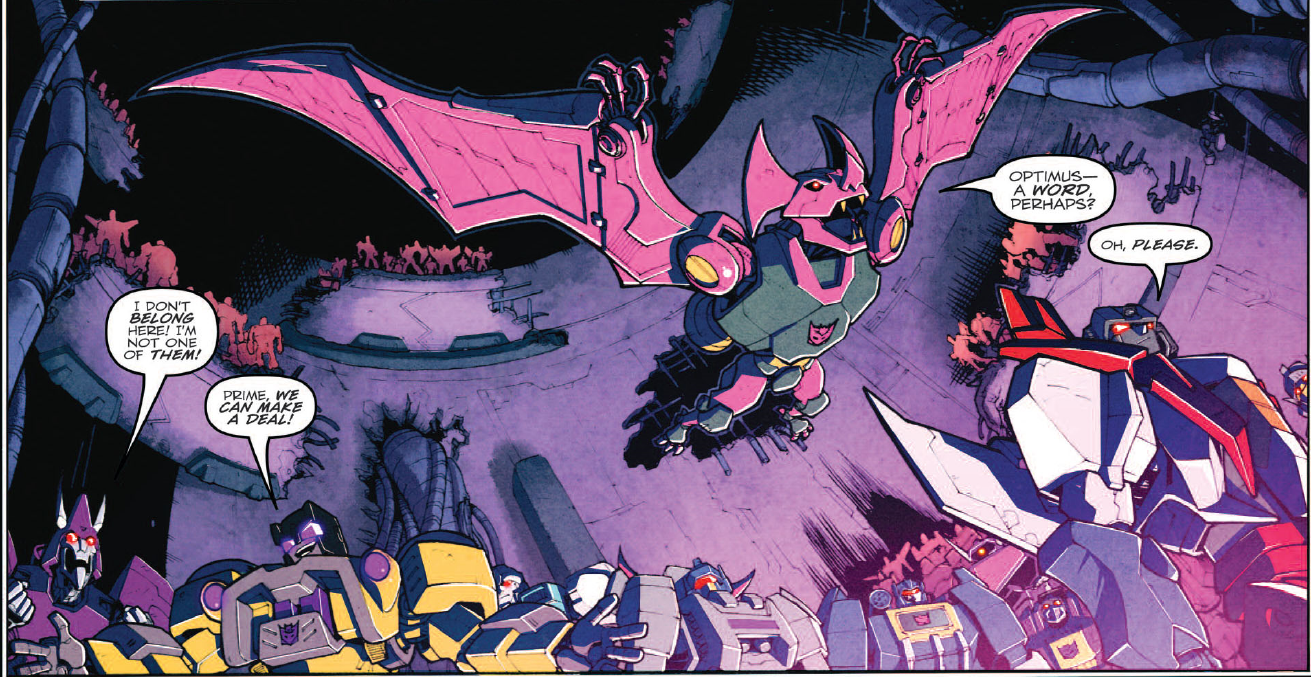 I mostly embedded these panels because Ratbat is stupid and I like him a lot. We'll be seeing a lot of both Rewind and that map. The map, in fact, drives the plot of this particular comic in a way.
A lot of stuff happens in the next few pages. To quickly summarize: Rodimus, and Drift (alias Dirufito, yes really, who we haven't seen yet but will be seeing repeatedly. Nobody likes Drift) want to go search for the legendary Knights of Cybertron, a group of mythological figures who left the planet eons ago to (direct quote here) "spread enlightenment amongst the stars". Bumblebee and Rodimus get into it because of this and insult each other a bunch, Rodimus wanting to leave and let the NAILs have Cybertron, Bumblebee calling him childish and wanting to stay.
While all this is happening, there are a ton of NAIL protesters outside Autobot Command, protesting what they see as an occupation. Then, one of the NAILs lobs a homemade explosive, knocking several Autobots on their feet and just generally escalating things. Then, Prowl, who is again someone we'll be seeing now and again, head of autobot intelligence, general paranoid creep, and Easily The Worst Transformer, does this: 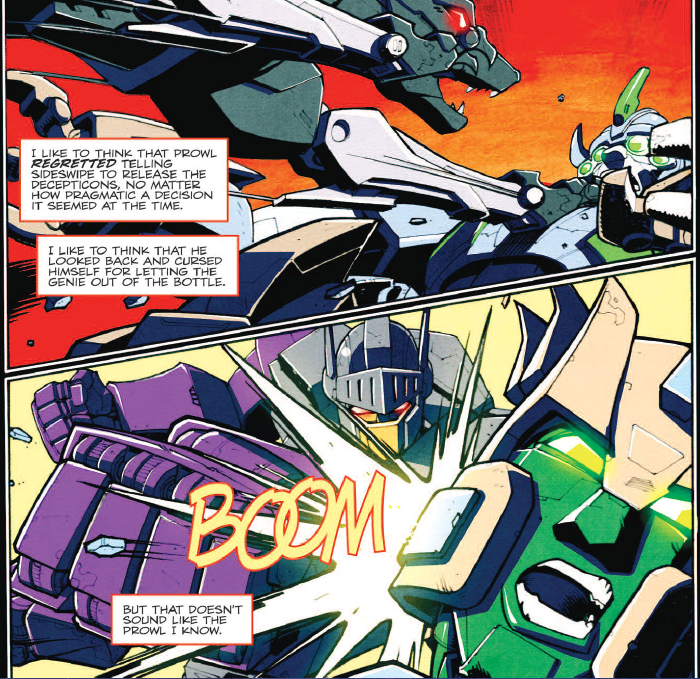 We learn that the Decepticon POWs have what are called I/D chips, which prevent them from switching to their altmodes or using their built-in weapons, and can even be detonated if they get too out of hand. Optimus is not exactly happy with this but at this point he can't really do anything.
In the ensuing brawl, the Decepticons are used to quell the crowd. Metalhawk tries to talk the NAILs down and is promptly shot for his troubles.

Meanwhile, Autobot high command continue arguing about whether they should stay or should they go now. Rodimus and Drift (he's the one saying "two outcasts!" etc. below) resolve to leave, but are joined by an unexpected third 'bot. 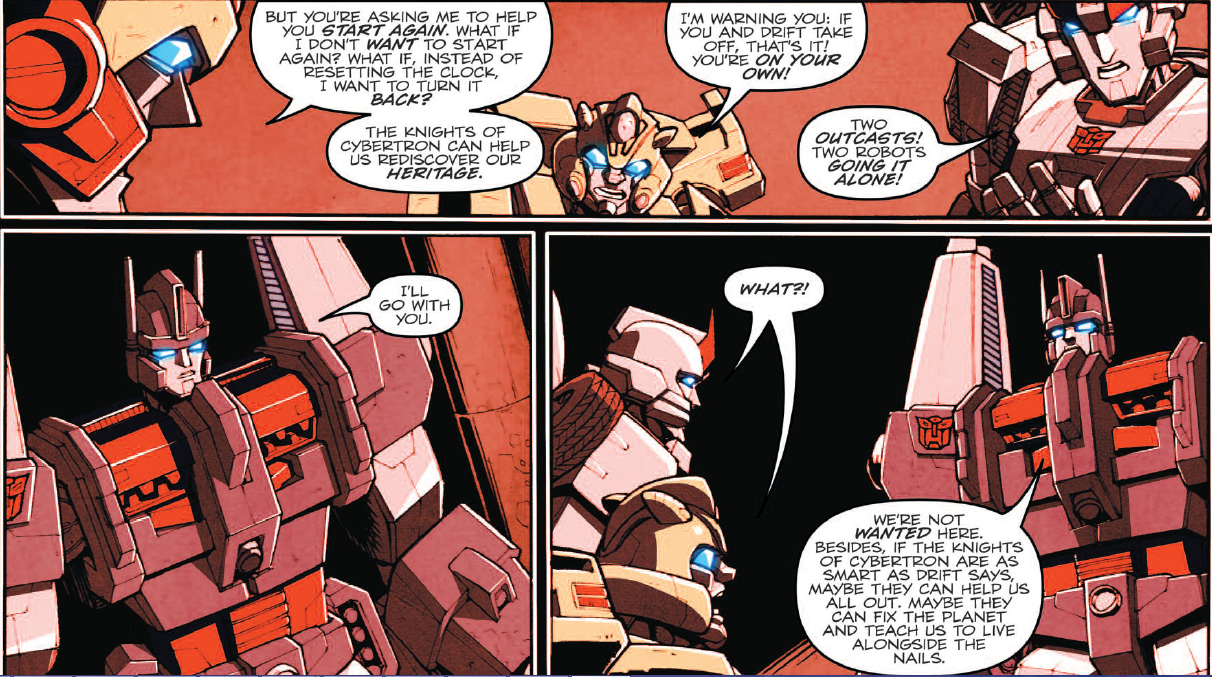 That's Ultra Magnus, the rule-obsessed cop-type character of the Autobot army. He usually can't deal with things now, but this thing he can apparently deal with. He throws his lot in with Rodimus and Drift.

This is Prowl for the record. He is a garbage man.
He does give a reason for his vitriol (he tried to desert as well, but his escape ship was shot down and out of other options, ended up joining back up with the Autobot cause). I'm not inclined to give him the benefit of a doubt though, for reasons that'll become clear later.
Optimus Prime makes one last effort to defuse the crowd. Dude knows how to give a good speech.
And with that, Optimus exits stage left. Rodimus and Bumblebee continue to bicker, but we'll get to that next update.
For now, I'll let these panels speak for themselves: Funny thing about Megatron. But we'll get to him later.
Now, I must confess that I have very slightly misled you.
Because what we just read was not MTME #001. It was, in fact, the very last issue of IDW's main Transformers line.
From here on, it splits in two. More Than Meets The Eye follows Rodimus, and the sister series Robots In Disguise follows Bumblebee. We will begin reading the former with the next update.
'til all are one, and all that.
Tagged: