Homura Akemi
2014-12-28 21:49:57 in Liveblogs
The year is 769. Karl Karling, known to us as Charlemagne, Charles the Great, has just awoken in a sweat from a nightmare. In it, he duels his brother Karloman--co-king of Francia--and loses, tripping and falling prone, only to be slashed across the belly by Karloman's sword.
Silently, he resolves to never let such a dark reality come to pass.
--
Hello and welcome to yet another CK2 AAR. I see no need for formalities, so we'll just dive right in. I will say though that I am not going to be covering all of CK2's mechanics, it's simply too far outside this AAR's scope. Comments in this very thread are welcome. this is us. Karolus Magnus himself, we have an astoundingly high martial score, good stewardship, and little else of note. Our current ambition (represented by the crown) is to become Exalted Among Men, at which point we should gain the appropriate epitaph "The Great". We're the son of Pepin the Younger (often misnamed Pepin The Short), who some in our realm (and the game itself) consider an emperor of sorts. We are the heir to half of his empire, West Francia. Our treacherous brother Karloman rules Middle Francia, and our biggest short-term goal will to be to find a way to relieve him of this position.
But before we begin, let's take a look at the world, shall we? The Lombards who rule Italy are of interest to us for reasons I'll reveal shortly. Also of note are the Umayyads, a Muslim state in Iberia we share an unfortunate border with. They will likely be the source of much frustration in the years to come, but for now, we are at peace with them. The Ancient World, including the holy land, is ruled by the Abbasid Caliphate, who clash frequently with the ancient Greek Empire of Byzantium. Zunbil is interesting as the sole followers of the religion of Zunism, but they are of no concern to us at all. 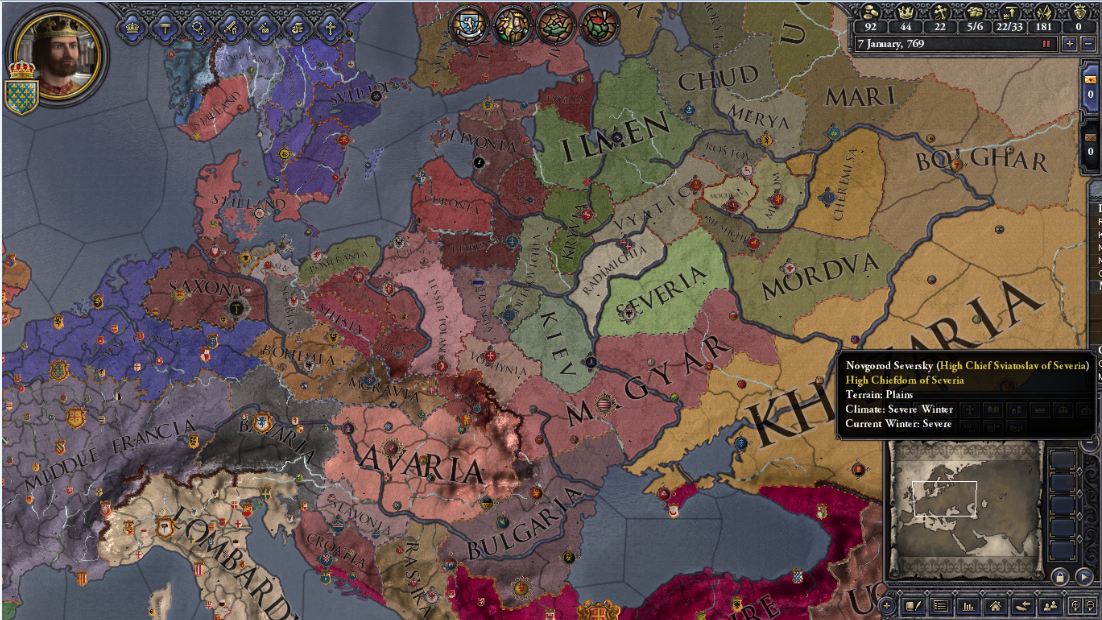 to our east and north are pagan petty kingdom upon pagan petty kingdom. These lands are less realms and more targets as far as we're concerned. Once we bring western europe to heel, they will provide ample opportunities for expansion. This popup spells out what we already know. Karloman is plotting to steal our lands for himself (he is, at game start, our heir). But we are stronger, smarter, and despite a number of unhappy vassals, our realm is superior to his. Even if it weren't, we take the daughter of the Lombard King Desiderius as our bride, securing an alliance that will surely last until the end of days. 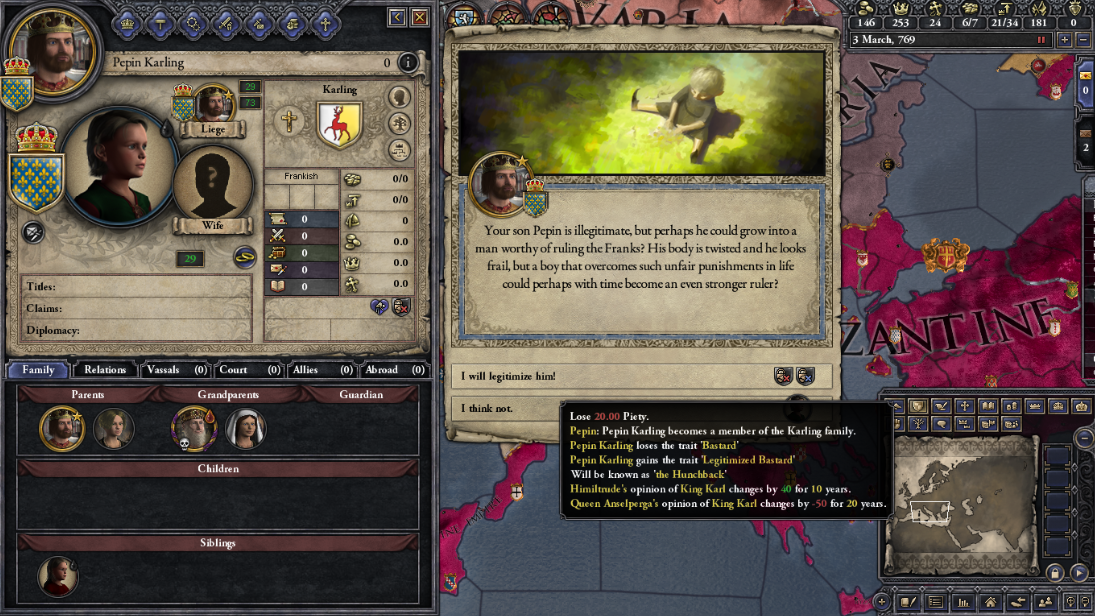 We also decide to legitimize our only son, the hunchbacked Pepin. Our wife is a bit miffed at our decision, but she'll get over it, surely.
With our family matters taken care of for the moment, we strike out on our first conquest. These Saxon lands will be ours, and their men will make excellent soldiers against our wicked brother.
Tagged: