Anonus
2020-06-05 03:43:18 in Testing Grounds
ATLANTA, Ga. and CHICAGO, Ill., May 27, 2020 - Metro-Cox, Inc. (NASDAQ: MCOX) and Graham Holdings Company (NYSE: GHC) have reached a definitive agreement to merge their television station holdings in a cash and stock transaction valued at $1.5 billion.
Under the terms of the agreement, Metro-Cox will acquire Graham Media Group from Graham Holdings for $950 million in cash and approximately $550 million worth of Metro-Cox shares. At closing, the exact amount of Metro-Cox stock issued will be adjusted so as to represent no less than 35% of the value of the transaction.
At closing, Metro-Cox will own 19 television stations in 15 markets, including three in the top ten; Atlanta (WSB), Houston (KPRC), and Boston (WFXT), with duopolies in four markets; Orlando, Charlotte, Jacksonville, and Tulsa. Metro-Cox and Graham Media each own stations in two markets, Orlando and Jacksonville. Metro-Cox will retain its Orlando stations, ABC affiliate WFTV and independent station WRDQ, and sell Graham's CBS affiliate in the market, WKMG. It will also retain Graham's Jacksonville stations, independent station WJXT and CW affiliate WCWJ, while selling its Fox affiliate, WFOX, as well as its operating agreements with CBS affiliate WJAX. The 19 stations Metro-Cox will retain will operate as part of the company's existing television station group, Cox Television, which will boast an expanded reach of approximately 18% of U.S. television households. 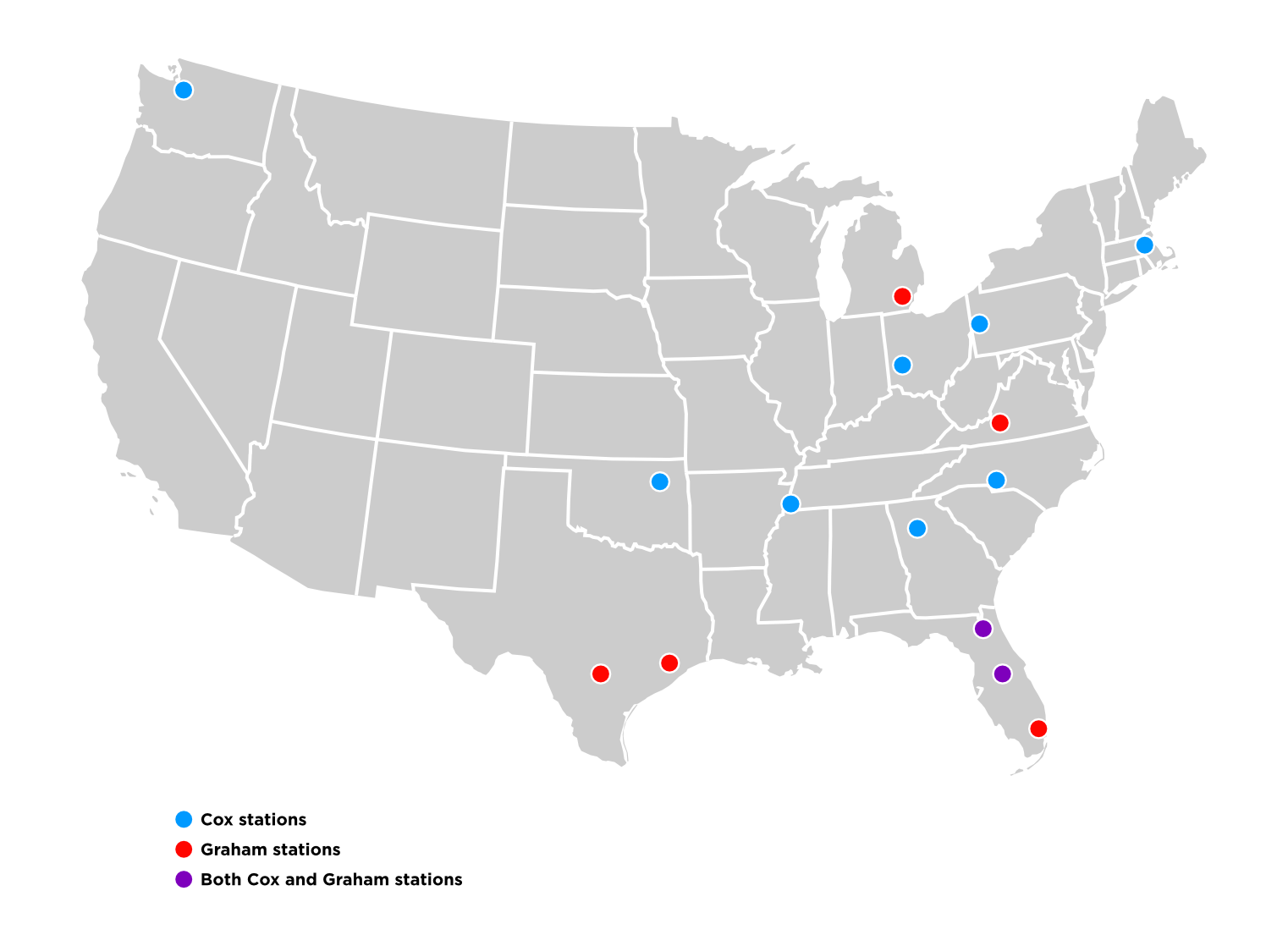 Metro-Cox CEO Kim Guthrie said, "Opportunities to expand our high-quality television station group are rare, and we could not be happier that Graham has chosen Metro-Cox to steer its broadcasting properties into the future."
Graham Holdings CEO Donald E. Graham said, "Achieving scale in the rapidly-consolidating television station business can be difficult, and merging Graham Media Group with the Metro-Cox television stations allows us to realize a return on our decades-long investment in the business, in a way that allows us to retain a significant stake in a highly profitable industry."
Based on the closing price of Metro-Cox shares on May 26, Graham Holdings will receive 51,000,000 shares of Metro-Cox stock, giving the company approximately 50.5% of Metro-Cox shares. This percentage may be lower or higher depending on the price of Metro-Cox stock at the close of the deal. Metro-Cox's ten-member board will expand to twelve, with seven members selected by Metro-Cox and five selected by Graham Holdings.
(Disclaimer: This entire article was transmitted to me from a fantasy world far away from our own)